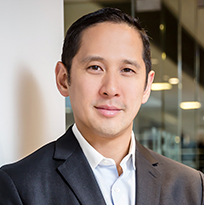 Spencer Fung is Group Executive Chairman of Li & Fung. He is focused on leveraging the Company’s global network and uniting its ecosystem partners to drive transformation and create the Supply Chain of the Future.

Prior to becoming Group Executive Chairman, Spencer was Group CEO from 2014 to 2020 and the architect of the company’s goal to create the supply chain of the future to help its customers navigate the digital economy and to improve the lives of a billion people in the supply chain.

He joined Li & Fung as a merchandiser in 2001 and has been involved in all aspects of its operations, serving customers across three continents and managing acquisitions and integrations in over 20 countries. During his time as President of LF Europe, Spencer built the operating group into one of the largest private label suppliers in Europe. As Group Chief Operating Officer, he was responsible for building the company’s global infrastructure.

Spencer began his career with PwC in Boston in 1996. In 1999, he co-founded HelloAsia.com, a Silicon Valley startup with $30 million of venture capital funding and created one of the first pan-Asian online marketing platforms.

Spencer is an independent non-executive director of Swire Properties Limited. He is also a member of the General Committee of The Hong Kong Exporters’ Association and on the Board of Trustees at Northeastern University. He has served on the Advisory Board of the British Fashion Council. In January 2021, he was appointed Alternate Representative of Hong Kong to the Asia-Pacific Economic Cooperation (APEC) Business Advisory Council (ABAC).

He holds a Bachelor of Arts degree from Harvard University and Master of Science in Accounting and Master in Business Administration from Northeastern University in the US. He was previously a US-Certified Public Accountant.